Posted by David Stafford on April 03, 2012
Guess what? We traveled to Florida last week.

On the day we were supposed to fly out, I had a cold. In the car on the way to the airport, I threw up my morning snack. That was an unpleasant surprise. Dad pulled over so they could clean me up in a McDonald's restroom. Dad called the airline and they said we could change our flight over the phone for $1200 or go to the airport and see if they'd declare us unfit to fly and let us switch. So we had to continue on to the airport, me crying and screaming "go home" all the way. It was awful. I threw up again upon pulling into the airport so I had to be cleaned up again. At least we had a visual aid for the ticket agent!

The next day I was feeling better so we got on our airplane. When we got in our rental car it was really funny because Dad couldn't figure out how to change the display from Spanish to English.

We drove to Lakeland for our "sleep place" of the evening. When we got there, we found Uncle Bob and Grandpa. They let me stay up really late and eat leftover pizza!

The next day we went to a Tigers baseball game. The best part was the strawberry shortcake and Grandpa letting me take pictures with his camera. Grandpa got me a stuffed animal pizza that Dad named "Mr. Slicey." About a third of the game down, I got really antsy and Mom had to walk me around. I was grouchy because I was missing my nap, but of course I didn't admit that. After the game, we drove to Tampa and I took a nap in the car. Mom and Dad hauled me into a Hard Rock to get our pins, but I slept through it.

Then we went to Legoland. I got to drive a car and a boat there. They had a room with video games in it. One of the workers told me there was a really cool Elmo game and that he would show me it after he was done playing some level in his game. Mom and Dad didn't have kind words for him.

Then we went to a new city called Boca with a big sleep place. We were supposed to go swimming one day, but it rained! We did go to a center to see some sea turtles (boring) and a nice kids park.

I enjoyed sleeping with Mom and Dad and getting to stay up late the whole vacation. I've been demanding we keep that up at home.

We finished the trip in Miami. We learned about pirates at the children's museum and walked around South Beach. I didn't like the ocean the last time I saw it, but this time I enjoyed the waves coming in and the wet sand.

Throughout the whole trip I looked for garbage trucks and dumpsters EVERYWHERE we went. It was the highlight of the trip. We even spotted RARE white dumpsters! I make Mom and Dad take me behind sleep and eat places so we can dumpster hunt. It's so fun.

Someone needs to open a garbage truck museum!

Now I don't have either of my front top teeth! /Alden 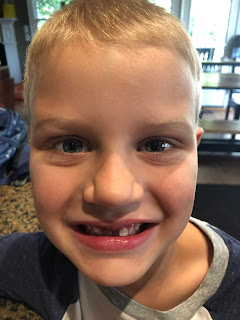 I'm done with my Saturday reading school now. I'm making great progress. I lost a front tooth yesterday. I have a really big gap now. I'm growing more confident in the pool. I didn't have much interest before, but now swimming is more interesting to me. An even bigger gap. Done with Saturday reading school. Growing more confident in the pool! /Trent