Posted by Kristen S on April 22, 2013
Hi all! We had an adventure to Myrtle Beach this weekend.  It was for a Jaycees golf outing. We left on Friday night. There was a scary thunderstorm during the drive. We had to pull over for a bit because it was too hard to see.

On Saturday I learned our friends Miss Joni, Mr. Dave, Paige, and Brendan were there. Daddy and Mr. Dave went golfing really early. The rest of us went out for breakfast. The weather wasn't very nice for beach stuff so we went to a children's museum. Later, I took a nap while Paige and Brendan played in the pool. Alden was invited but he didn't want to leave Mommy. After my nap we went to play pirate putt-putt golf. We went to another eat place for a buffet and I let people know there I was over being kept up past my bed time.

The best part was crawling after rolling golf balls in the hotel room.

We came drove on Sunday. We stopped so everyone could pee or get their diaper changed. Alden refused to participate. Of course, he decided he needed to pee after we got back on the highway. He then started screaming about it, but there was no where to stop. Aunt Jenny called during that time to share some news. I think Mom heard every 3rd word. We stopped at a rest area but Alden said the Men's room was too loud. So Daddy had to hand him over to Mommy to try in the ladies room.

Last week we went to the family dentist (same place Mom and Dad go) for the first time. We had been going to a kid dentist, but Mom complained about being "out-of-network" so she switched us. We did awesome. The family dentist does have a TV to watch during cleanings and a prize box. Mom is so happy she doesn't need to process the insurance manually.

We've been learning about nursery rhymes at school. Some of the moms came in on Friday and helped us do nursery rhymes crafts. Mom ran the "Jack B. Nimble" craft.

We spent time this weekend helping Mom put up Halloween decorations. Friday night we had pizza and watched an Elvira movie. 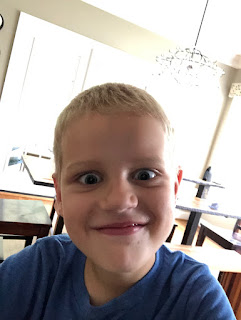 The end of school is getting close. This week we had our last cub scout event of the year - a picnic. Today we enjoyed the pool. Yesterday we went mining. I'm so excited for my upcoming birthday. 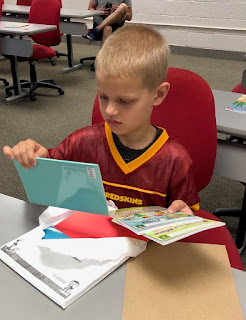 To keep my reading skills sharp, I'm taking a reading camp at a college. I'm not happy about it, but Mom is so excited for me.